He recorded for Nelson Riddle, Frank Sinatra, Stan Kenton and John Williams and can be heard on the soundtrack for ‘Jaws’

George M. Roberts, the master musician known as “Mr. Bass Trombone” whose melodic sound can be heard on Nelson Riddle-arranged albums for Frank Sinatra and Dean Martin, has died. He was 86.

After a long battle with multiple sclerosis, Roberts died Saturday of complications from pneumonia in Fallbrook, California, the International Trombone Association announced.

Roberts’ skillful and innovative playing made him a much-in-demand session player in Los Angeles from the 1950s through the ’80s. In 2005, he estimated that he had played on more than 6,000 recordings, spanning a half-century.

Riddle, who was under contract at Capitol Records as a staff arranger in the ’50s, used Roberts for albums recorded by the likes of Sinatra, Martin, Nat “King” Cole and Ella Fitzgerald, and he helped to define the orchestrator’s signature swingin’ sound.

For Billy May‘s 1958 album Big Fat Brass, May saluted the Riddle-Roberts connection by writing a bass trombone feature that Roberts performed on “Solving the Riddle.”

In 1959 and 1960, the trombonist recorded two bouncy albums of his own, Meet Mr. Roberts and Bottoms Up (1960), for Columbia Records. John Williams served as the arranger and pianist on the second album, and Roberts would go on to work for the eventual five-time Oscar winner on such films as Jaws (1975) and Close Encounters of the Third Kind (1977).

Roberts played in the orchestras for The Rosemary Clooney Show, The Dinah Shore Show, The Academy Awards and for President John F. Kennedy‘s inaugural ceremony in 1961, and worked with Lalo Schifrin (Mission: Impossible, Mannix) as well.

George Mortimer Roberts was born March 22, 1928, in Des Moines, Iowa. His brother played the baritone saxophone in the junior high school band, but Roberts was smitten with another instrument, the one “that went back and forth,” he said in a 2005 interview.

However, the band director said Roberts’ arms were not long enough to play the trombone and suggested he take up the clarinet. He tried and wasn’t happy with that, but was elated when his parents bought him a new Super Olds trombone.

After serving in the U.S. Navy, Roberts studied at the American Operatic Lab in Los Angeles, then landed a gig with Gene Krupa‘s band, where he switched from lead trombone to bass after realizing he couldn’t compete with Urbie Green. He worked with Stan Kenton‘s band through 1953, then made his mark as a freelance session player.

He was involved with the International Trombone Association for many years and served as the namesake for the George Roberts Bass Trombone Competition. 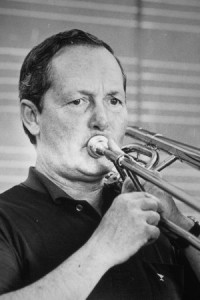