Bones-Southwest is frequented by a number of local trombonists, but these fine players make up our core of regulars. 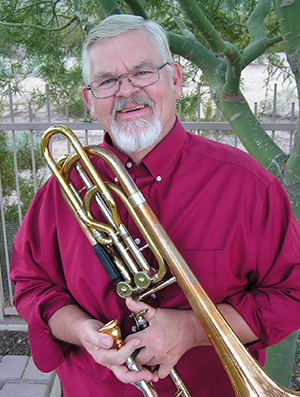 Bob Weller attended Coronado High School in Scottsdale, Arizona during the late ‘60s.  He played tenor trombone through out high school.  In addition to high school instrumental groups, Bob was also a three year All State band and orchestra member.

Bob attended college at Arizona State University in Tempe, Arizona as a music education major.  He studied tenor and bass trombone with John Shipp, David Walters and Gail Wilson.  While at A.S.U., Bob was a member the Sun Devil marching band, wind ensemble, brass choir, orchestra and jazz band. He graduated with a Bachelor of Arts in Education.

While in college Bob joined the local musicians union and played professionally for fifteen years in the Phoenix area.   During that time he had the opportunity to play in show bands behind artists such as Sammy Davis Jr., Barbara Eden, Liberace, Eddie Arnold, The Pointer Sisters, Glen Campbell, Mitzi Gaynor, Bill Cosby and Henry Mancini.    His playing also included The Ringling Brothers Circus, Ice Follies and Ice Capades.

Bob was also a member of the 108th Army Band stationed in Phoenix.  The trombones were put away when the family activities and the day time teaching job became more important.  Bob taught band in the Phoenix area for 34 years.  His teaching included high school, middle school and elementary bands.

On retirement from teaching the trombones came out of the closet.  The trombone choir and other groups such as local big bands and orchestras have given Bob the chance to play again.  Bob is a founding member and the leader of Bones Southwest.  His many duties include: anchoring the bass trombone parts, maintaining the music folders, and organizing rehearsals and performances 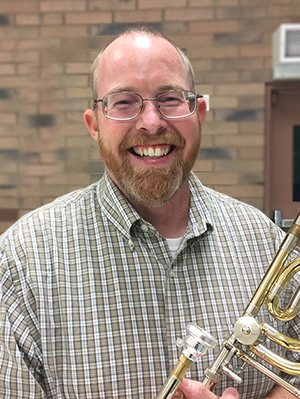 Michael Eastin was born and raised in Arizona. His parents moved to Peoria in 1972 where he attended Ira A Murphy Elementary School and joined band in the 5th grade. Michael attended Peoria High School where he was very active in the band program. By the end of his senior year he had participated in many Solo and Ensemble, Regional and All-State Band festivals. He was also the recipient of the John Phillip Sousa Award his senior year.

Michael is a founding member of Bones Southwest with Bob Weller, and his favorite piece from our book is West Side Story (He gets very excited when we call it.) 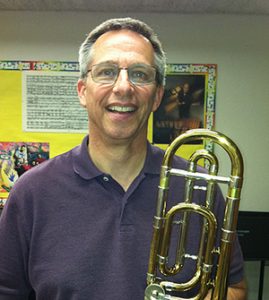 Peter Kyhn moved to the Valley of the Sun in 2006 from Denver, CO where he played two seasons with the Rocky Mountain Brassworks British Brass Band.

He is the Associate Pastor at Palm West Community Church in Sun City West. Peter started playing trombone in the third grade in Oakland, CA, was a member of the Weldonian Marching Band, and played under the legendary west coast arranger and band leader Lyle Bardo in Youth of America. While living in San Jose, CA he played with the Touch of Brass big band, under section leader Joe Davis, father of New York trombonist Mike Davis.

He received a Bachelors of Art in Music Performance from California State University, East Bay, studying with Dan Livesay. 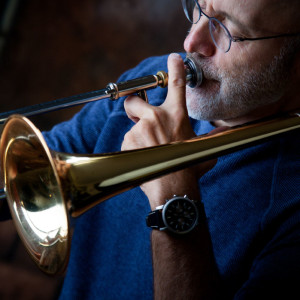 Michael Lake started playing trombone at age 10 just before his family moved to Arizona. Mike grew up in Phoenix and lived in the valley until he left Arizona State as a Jazz Performance/Composition major. It was at ASU that Mike fell in love with alto trombone which he has played exclusively ever since. (Don’t ask him to play tenor – he barely remembers the positions and can’t even hit the partials!!) He considers himself blessed by having Warren “Jeff” Jefferies at Arcadia High School and Dan Haerle at ASU as his two indispensable early jazz mentors. At ASU, Gail Wilson and fellow Bones Southwest colleague Kevin Hedges gave him a solid technical foundation on trombone.

Michael lived and played professionally in Minneapolis, Philadelphia, Boston, and New York as a studio musician, jazz player and salsa guy in venues from Club Broadway to the Village Gate to Carnegie Hall. In Boston, Michael led a salsa band called Caribbean Express which was nominated for a Best Latin Album Grammy. He still hasn’t gotten over losing to Julio Ingelsias. Following that, he became an in-demand latin trombonist for Frankie Ruiz, Lalo Rodriguez, Ray Barretto and many others.

Michael owns a multimedia production studio in Cave Creek where he writes and records for CDs, TV and film. You can hear Michael’s very unique multimedia treatment of the alto trombone at www.musicsavvy.com . 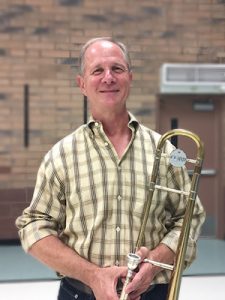 David Lubeck started playing trombone in elementary school in Ohio and has been playing off and on non professionally ever since. During high school, Dave played in district bands, American Legion bands, brass ensembles, and for two summers, with the All Ohio Boys’ Band. He also played in the concert band at Bowling Green State University.

Dave graduated from Bowling Green State University, majoring in Mathematics and German,and from the Ohio State University, in Computer Science.Following university, Dave has balanced spousal, family and career obligations and, with the little remaining free-time, playing in corporate recreational bands and in the Glendale Community College band. Dave played in the Scottsdale Community College pit band for their presentation of “Spamalot” in April 2017.

Having retired, he is happy to have a chance to play regularly again with all the talented trombonists in Bones Southwest. 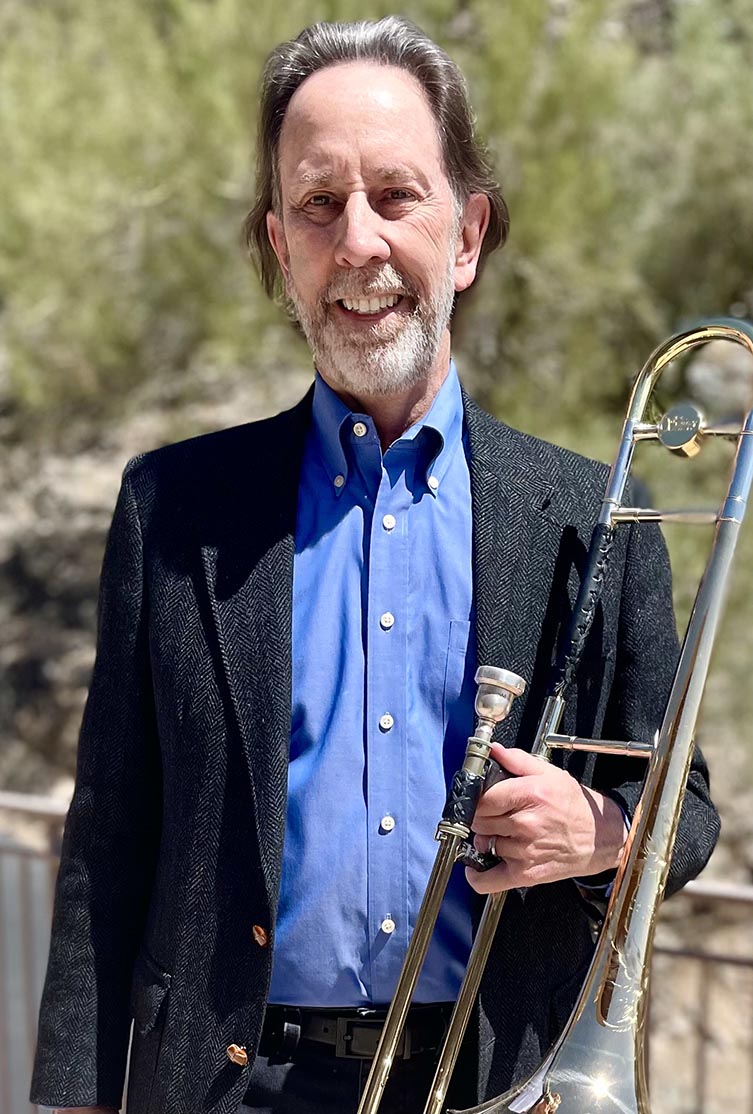 After playing trombone in his college concert band at Ohio Northern University, Ralph paused his trombone playing when he went to law school at Arizona State University College of Law. For more than 38 years, Ralph has been a lawyer at the Burch & Cracchiolo law firm in Phoenix, where he continues to practice commercial litigation. In 2005, Ralph returned to playing trombone. Since that time, he has joined​ a number of small groups playing a variety of types of music.

Ralph has volunteered to play with small groups at retirement facilities and at fundraising events for charities. He has also played in the jazz big bands at Chandler-Gilbert Community College and at Phoenix College. Ralph enjoys playing with Bones Southwest and especially enjoys its fine members who have welcomed him into their trombone community. 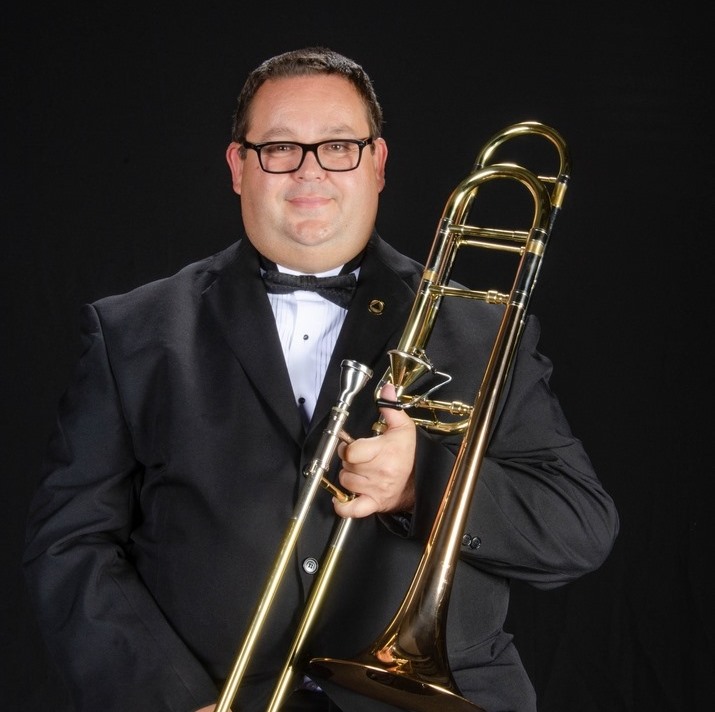 Lee Cook was born in North Carolina and graduated from East Burke High School, Icard, NC. He played trombone in marching band, concert band and jazz band. Lee taught in Florida for 6 years prior to moving to Arizona in 2009. While in Florida, he was a member of the Paradise Big Band and McGregor Baptist Church Orchestra.

Lee earned a Bachelor’s Degree in Music at Limestone College in Gaffney, SC. While there, he was a member of the wind ensemble, jazz band, trombone choir, brass choir and show choir band. Lee made the South Carolina Music Educators Association Collegiate All State Band twice. He studied privately with Tom Pollett and John Barlett, Principal Trombone with Charlotte Symphony Orchestra. In addition to the Limestone College Ensembles, he was a member of the First Baptist Church of Spartanburg and was a freelance musician and private instructor in the Greenville/Spartanburg area.
Lee attended graduate at Valdosta State University, Valdosta, GA and a Masters Degree in Music Education. He was assistant director of the Blazin’ Brigade Marching Band and basketball pep bands. Lee performed as a member of the Blazin’ Bones Trombone Choir as a trombone player and conductor.
Currently, he is the band director at Legacy Traditional School Phoenix. He is a member of the North Valley Symphony Orchestra and Glendale Summer Band. Lee have performed with Estrella Community College Community Band, Arizona Brass Band, and Phoenix Community College Community Orchestra. 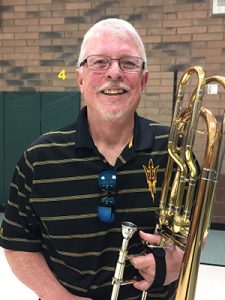 Foster Burton attended high school in Western Pennsylvania moving to Arizona after graduation to attend Arizona State University. He played tuba in his high school band and attended college at A.S.U. as a music education major where he studied tuba with Carla Rutschman and Eugene Anderson, and bass trombone with Gail Wilson.

He graduated with a Bachelor of Music in Instrumental Music. He has played professionally in the Phoenix area on tuba, and taught tuba, baritone, and trombone lessons privately. Foster has been a member of the Tempe Symphony, the Scottsdale Symphony, the Scottsdale Community Band, the Mesa Community Band, and performed with the Mesa Symphony at various times since graduating from A.S.U., and currently plays tuba in the Arizona Wind Symphony.

He began his teaching career in Scottsdale at Coronado High School and taught in the Baltz school district before accepting a teaching position with Mesa Public Schools. He taught elementary band and general music in Mesa before moving into the classroom where he taught fourth, fifth, and sixth grades. Now that he is fully retired he enjoys playing tuba and trombone again. 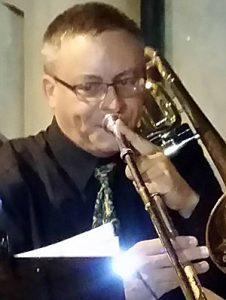 Mike Vargas is a native of Scottsdale Arizona. Mike started playing trombone in the fourth grade and except for a short break, has continued to perform with various concert and jazz bands.

Mike spent two seasons in the Blue Knights Drum and Bugle Corps from Denver Colorado and aged out competing in the DCI World Championships in Jackson Mississippi in 1993.  In addition to Bones Southwest, he currently plays with the Scottsdale Concert Band and has sat in with numerous ensembles in the Phoenix area, including Desert City Jazz, Scottsdale Community College Orchestra, South Mountain Community College Latin Jazz Ensemble and Desert Overture.  He is also a founding member of the Chaparral Brass Quintet.  Mike spends the fall working with the Coronado High School Marching Band and the rest of his time with friends and family and work as a computer technician.

There are no upcoming events at this time.