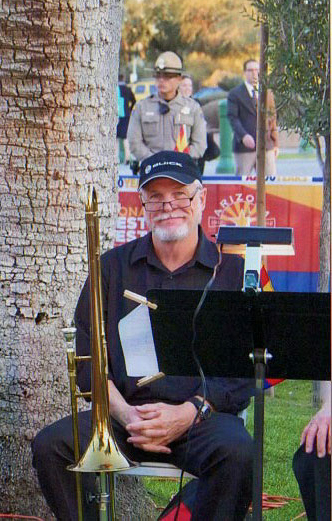 Dick Holt is one of the all-time great trombone enthusiasts. You’d be hard pressed to think of a trombone player Dick hasn’t heard of, or a trombone album he doesn’t own. Asked once about the type of music in his car, Dick replied, “All trombone, all the time.”

Dick (Dr. Dick) Holt is the cheerleader of the group and has been dubbed Dr. Dick because of his readiness to bend a slide into submission.  He also has a splendid background of playing behind many of the greats. Frank Sinatra, Tony Bennett, Dinah Shore, Wayne Newton, Dorsey Orchestra, Temptations, Little Anthony and the Imperials, Ice Capades, Ringling Brothers Circus, parking lot carpet sales and a couple goat ropings (WHEW!!).  Total lifetime net earnings from music of over $36.50.  Dick used a lot of slide grease which adds up quickly.

Dick is shown in this photo recently playing at the state capital. Notice the police in back? Dick always makes sure to have a security detail wherever he performs. “With all the autograph fanatics I get, I have to watch out for the crazies. I can’t tell you how many times someone has tried to make off with a souvenir of my mouthpiece, water bottle or slide cream!”

A passionate collector of trombone recordings spanning over the past 60 years, Dick is well known for his unparalleled passion for all things trombone. It’s been rumored that he won’t allow a recording of any instrument OTHER than the trombone to be played in his home or car stereos!