Bones Southwest is comprised of some of the most talented trombone players in the state of Arizona. Some professional, some retired professional, some long-time enthusiasts. Each member is  a passionate aficionado of the trombone.   Most every variation of the horn is represented from bass trombone to alto trombone .

The following is a partial list of the active player in the group: 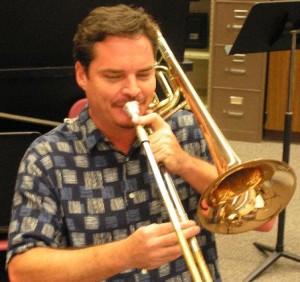 Dale Bergersen is a Phoenix native who started playing trombone at the age of 8. Attending high school at Moon Valley, Dale was selected for the all-region band during his freshman year — prior to starting private lessons. After studying privately under Bob McAllister, Dale made the all-state band for the next three years.

During high school Dale had the honor of playing with: the Phoenix Symphony’s Youth Orchestra (2 years), Arizona Young Sounds Jazz Ensemble and Sunday Services in the orchestra at the Valley Cathedral. Dale also participated in the valley-wide marching band for the short-lived USFL’s Arizona Wranglers and in his spare time, Dale played for hire doing musicals, community theater, and various “church gigs.”Dale attended the University of Arizona on a music scholarship, studying under trombone professor Tom Ervin. While there, he performed in the Wildcat marching band, pep band, Concert band, and Jazz ensemble. Dale is a returning player whose horn went silent (too many years to admit ) and is in the process of getting back his old chops. He has always wanted to play in a trombone choir and enjoys the time spent with Bones Southwest. 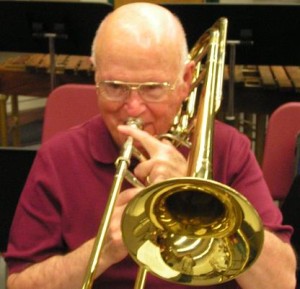 Earl Cosbey began playing the trombone in the 8th grade (1936) when the first band program was started at South Kitsap Jr.-Sr. High School at Port Orchard Washington. Classes were once a week for the first two years. During his junior and senior. years he won superior ratings as he competed as a trombone soloist in the National School Music Competitions. During this time he joined the Port Orchard Town Band and was also invited to join the Bremerton Elks Band.

In his junior year he was invited to play his contest solo, “Blue Bells Of Scotland” with the U.S. Navy Band stationed on the Battleship Arizona at one of their Sunday Band Concerts. This was a special honor. Earl attended the University of Washington playing 1st trombone in the Concert Band and the Marching Band directed by Prof Walter Welke, and the University Symphony Orchestra directed by Prof. George Kirshner. He studied trombone with Edward Benson, Prof.      Walter Welke, Kenneth Cloud and Joseph Burnside.

As a freelance trombone player Earl was a member of the theater orchestras that played for the New York road companies for Oklahoma, Carousel, Music Man, Sound Of Music, West Side Story, Man of La Mancha, among others. He also played for other shows such as the Ringling Brothers and Barnum and Bailey Circuses, the Shrine Circus, Ice Follies, Ice Capades and Aqua Follies every year and played backup, accompanying solists such as Eartha Kit, Mel Torme, Tony Bennett, Dean Martin and Perry Como, among others. He also played shows such as Bob Hope and Jerry Lewis with whom he toured. Earl played with local dance bands when not working other gigs and played many miscellaneous gigs too numerous to mention. He is a member of the International Trombone Association.

Earl taught elementary, junior high school and high school band in the Seattle area for 35 years and taught brass students privately for 30 years at his studio in Burien Washington. After retiring in 1985, he and his wife, Ruth, traveled around the world, finally coming to the Sun Cities area in 1998. Earl started playing again and has been active in many stage bands, concert bands, and orchestra since that time, retiring from the Sun City Concert Band in 2007.

Earl has been especially interested in trombone ensembles since retiring and helped to organize the first trombone ensemble in the Seattle area. He returns to Harstene Island in Washington each summer and while in the Puget sound area plays with the original group. He is especially encouraged that Bob Weller has organized the Bones Southwest and feels it is a special privilege to play with so many great young players. 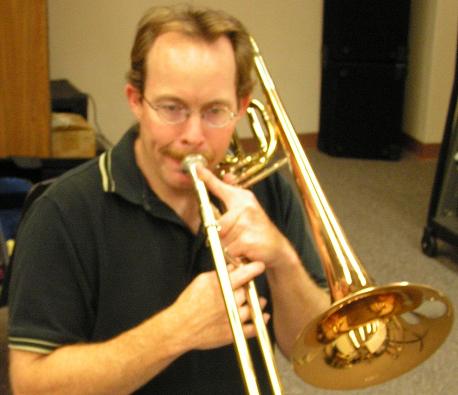 Michael Easton is the band director at Greenbriar Elementary in Glendale, Arizona. He plays first trombone in the Palmcroft Church Orchestra. He usually plays the first parts and leads by example with well developed chops and musicianship. Michael is a founding member of Bones Southwest, along with Bob Weller. 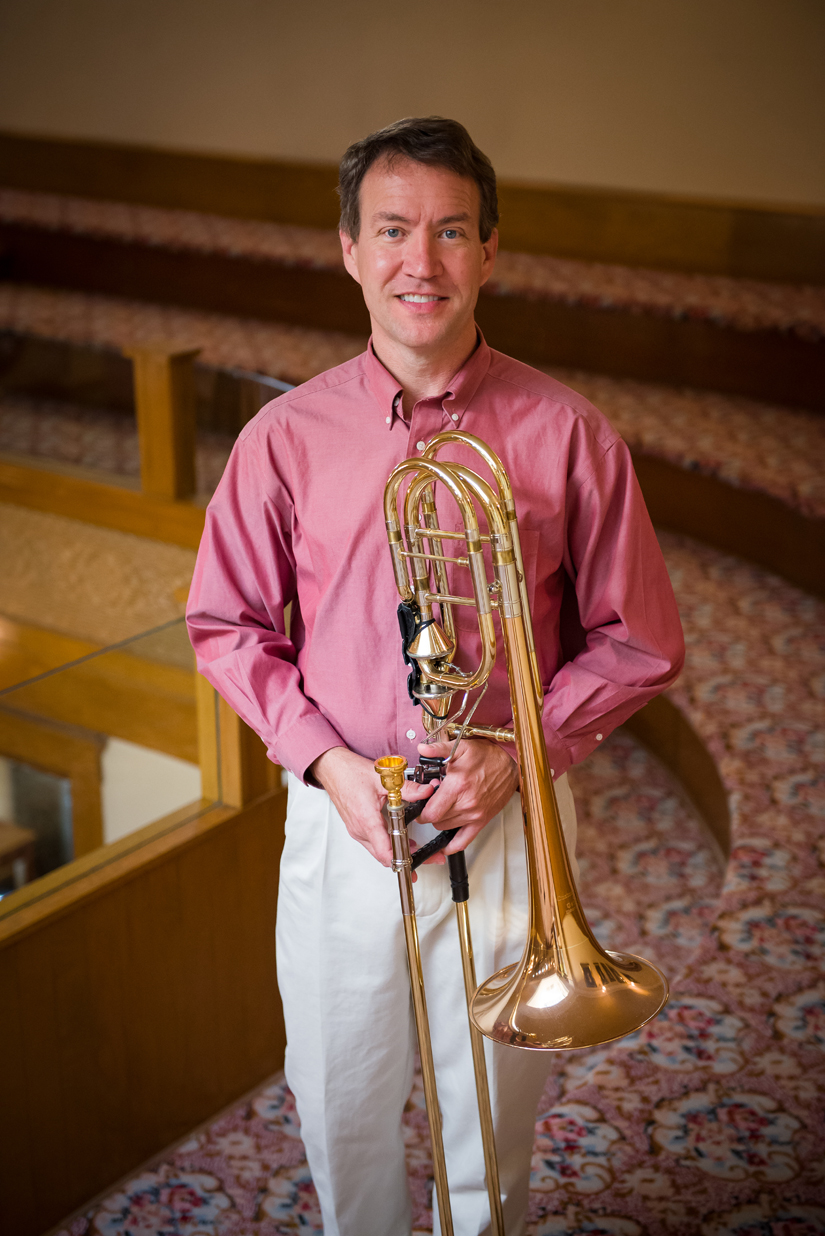 Ted Hale currently serves as the Deputy Director for the Arizona State Library, Archives and Public Records. In a previous life, Ted served as the General Manager of the Midland-Odessa Symphony and Chorale (from 1997-2006), helping foster a 20% increase in attendance and revenue. He was also principal trombone. Ted has toured, performed and recorded with Bob Hope, Dionne Warwick, the Spinners, Disney on Ice and others. He continues to perform with the Tempe Symphony, Southwest Symphony (NM) and other area ensembles, especially Southwest Bones. 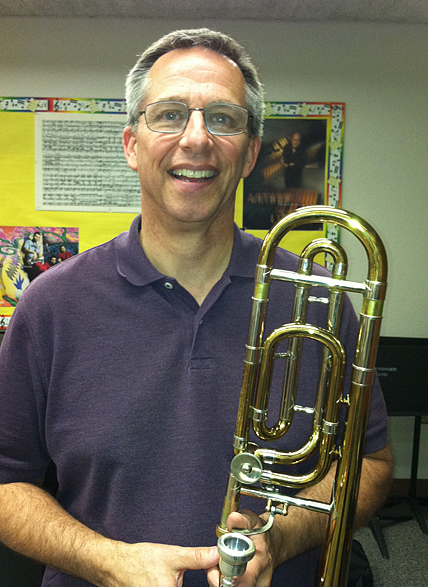 Peter Kyhn moved to the Valley of the Sun in 2006 from Denver, CO where he played two seasons with the Rocky Mountain Brassworks British Brass Band. He is the Associate Pastor at Palm West Community Church in Sun City West. Peter started playing trombone in the third grade in Oakland, CA, was a member of the Weldonian Marching Band, and played under the legendary west coast arranger and band leader Lyle Bardo in Youth of America. While living in San Jose, CA he played with the Touch of Brass big band, under section leader Joe Davis, father of New York trombonist Mike Davis. He received a Bachelors of Art in Music Performance from California State University, East Bay, studying with Dan Livesay. Michael Lake started playing trombone at age 10 growing up in Phoenix through his four years at Arizona State. Mid-way through college he picked up alto trombone, which he has played exclusively ever since. (Don’t ask him to play tenor – he doesn’t even remember the positions!) He considers himself blessed by having Warren “Jeff” Jefferies at Arcadia High School and Dan Haerle at ASU as his two indispensable early jazz mentors. At ASU, Gail Wilson and fellow Bones Southwest colleague Kevin Hedges gave him a solid technical foundation.

In 1978, Michael was to have studied with Frank Rosolino that summer under a National Endowment for the Arts grant, but due to Frank’s untimely death, Michael instead used the grant to study with trombonist George Lewis while spending the summer at the Creative Music Studio in Woodstock, NY where he also studied under avant garde giants Anthony Braxton and The Art Ensemble of Chicago.

Leaving Phoenix after college, Michael lived and played professionally in Minneapolis, Philadelphia, Boston, and New York as a studio musician, and also played in a variety of latin and jazz bands in venues from Club Broadway to the Village Gate to Carnegie Hall. In Boston, Michael led a salsa band called Caribbean Express that was nominated for a Best Latin Album Grammy. Following that, he became an in-demand latin trombonist for Frankie Ruiz, Lalo Rodriguez, Ray Barretto and many others.

He recently moved back to his beloved Phoenix where his energy is now focused on raising his two young boys, growing his business, and playing trombone with groups like Bones Southwest. Michael owns a multimedia production studio where he writes and records. You can hear Michael’s arranging and trombone playing at www.altobone.com . 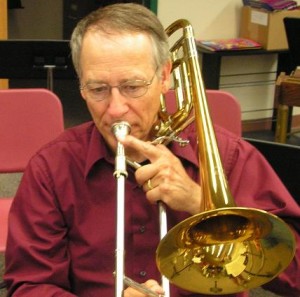 Tom Leander grew up in Minnesota, the son of a high school band director.  He started playing the Euphonium in the fifth grade, and while in high school played in numerous district, festival and honor bands, including the Minnesota All State Band for three years. As a Junior in HS, Tom auditioned for the Ted Mack Original Amateur hour, and played “The Carnival of Venice” on national TV in 1965.  He attended Mankato State College in Mankato, MN and earned his Bachelor of Science degree in Music Education.  While at Mankato, Tom was able to study with members of  the Minnesota Orchestra, and also spent a year at the University of Montana in Missoula, MT, studying Euphonium, Trombone, and conducting.  Over the years Tom has played with community bands, British Brass bands, large brass ensembles, brass quintets, quartets, Jazz bands, Orchestras, and has also conducted many of these groups. He taught high school band for ten years in Minnesota, and has worked in the insurance industry for the last 27 years to support his music habit.  Tom currently plays with a brass quartet, the Glendale Community College band, various churches and small groups in the Phoenix area, and Bones Southwest.  2008 celebrates 50 years of performing music on the Euphonium and Trombone. 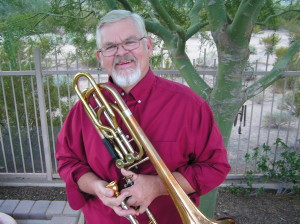 Bob Weller attended Coronado High School in Scottsdale, Arizona during the late ‘60s.  He played tenor trombone through out high school.  In addition to high school instrumental groups, Bob was also a three year All State band and orchestra member.  Bob attended college at Arizona State University in Tempe, Arizona as a music education major.  He studied tenor and bass trombone with John Shipp, David Walters and Gail Wilson.  While at A.S.U., Bob was a member the Sun Devil marching band, wind ensemble, brass choir, orchestra and jazz band. He graduated with a Bachelor of Arts in Education.  While in college Bob joined the local musicians union and played professionally for fifteen years in the Phoenix area.   During that time he had the opportunity to play in show bands behind artists such as Sammy Davis Jr., Barbara Eden, Liberace, Eddie Arnold, The Pointer Sisters, Glen Campbell, Mitzi Gaynor, Bill Cosby and Henry Mancini.    His playing also included The Ringling Brothers Circus, Ice Follies and Ice Capades.  Bob was also a member of the 108th Army Band stationed in Phoenix.  The trombones were put away when the family activities and the day time teaching job became more important.  Bob taught band in the Phoenix area for 34 years.  His teaching included high school, middle school and elementary bands.  On retirement from teaching the trombones came out of the closet.  The trombone choir and other groups such as local big bands and orchestras have given Bob the chance to play again.  Bob is a founding member and the leader of Bones Southwest.  His many duties include: anchoring the bass trombone parts, maintaining the music folders, and organizing rehearsals and performances.